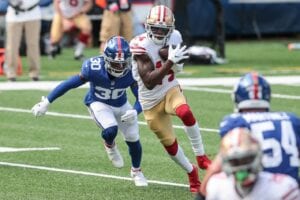 Sanu, 32, is a former third-round pick of the Bengals back in 2012. He spent four years in Cincinnati before signing a five-year, $32.5 million contract that included $14 million guaranteed with the Falcons in 2016.

The Falcons traded Sanu to the Patriots for a second-round pick before last year’s deadline. Sanu was set to make a base salary of $6.5 million in 2020 when New England cut him.

He later signed a one-year deal with the 49ers but was eventually released and finished out the 2020 season with the Lions, Sanu did, however, return to the 49ers this pastch March.

In 2021, Sanu has eight games for the 49ers and caught 15 passes for 177 yards receiving and no touchdowns.