Smith, 27, is a former second-round pick of the Ravens back in 2011. He’s currently in the second year of his five-year, $40 million contract that includes $22 million guaranteed and is set to make a base salary of $4.5 million for the 2016 season.

In 2016, Smith has appeared in 12 games for the 49ers and caught 20 passes for 267 yards receiving and three touchdowns. Pro Football Focus has him rated as the No. 117 receiver out of 118 qualifying players.

McManis, 22, wound up signing a three-year, $1.62 million contract with the 49ers as an undrafted free agent out of Memphis back in May. He was, unfortunately, cut loose during the final week of the preseason but was later signed to the team’s practice squad back in November.

During his college career, McManis recorded 110 tackles, three sacks, an interception returned for a touchdown, two pass defenses, two fumble recoveries and a forced fumble over the course of 35 games. 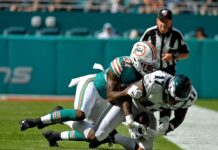