According to Eric Branch, the 49ers are placing DE Jordan Willis on injured reserve due to him needing a “clean-up procedure” on his knee. 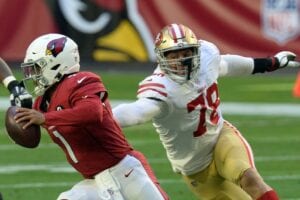 In a corresponding move, the team is promoting DE Kemoko Turay from the practice squad to the active roster.

Willis, 27, is a former third-round pick of the Bengals back in 2017. Willis was in the third year of his four-year, $3.61 million contract when the Bengals waived him in September of 2020.

Willis was later claimed off of waivers by the Jets and later traded to the 49ers back in October 2020. He made a base salary of $865,250 for the 2020 season before returning to San Francisco.

In 2021, Willis appeared in 10 games and recorded 15 tackles, two tackles for loss, three sacks, and one forced fumble.

Turay was testing out the free-agent market for the first time in his career when he signed with the 49ers.

In 2021, Turay appeared in 13 games for the Colts and recorded 9 total tackles and five and a half sacks.