The San Francisco 49ers announced on Monday that the team has re-signed TE Ross Dwelley to a one-year deal. 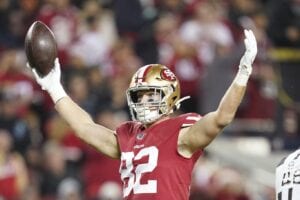 Dwelley, 27, signed with the 49ers as an undrafted free agent out of San Diego in 2018. He was waived coming out of the preseason but re-signed to San Francisco’s practice squad.

The 49ers promoted Dwelley to the active roster later in the year and he’s been there ever since. Dwelley returned to the 49ers last year on a one-year contract.

In 2021, Ross Dwelley appeared in all 17 games for the Cowboys and caught four passes for 51 yards receiving and one touchdown.