According to Adam Schefter, 49ers RT Mike McGlinchey suffered a torn quad and will miss the remainder of the 2021 season. 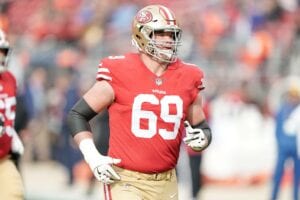 It’s yet another injury blow for the 49ers, who have been playing without LT Trent Williams in recent weeks as well.

McGlinchey, 26, was the ninth overall pick in the 2018 NFL Draft. He signed a four-year, $18.341 million dollar rookie contract with the 49ers that included an $11.4 million dollar signing bonus.

San Francisco exercised his fifth-year option for the 2022 season at $10.88 million.

In 2021, McGlinchey appeared in eight games for the 49ers and made eight starts at right tackle. Pro Football Focus had him rated as the No. 31 offensive tackle out of 79 qualifying players.