According to Nick Wagoner, the 49ers are signing TE Troy Fumagalli and releasing TE Garrett Walston in a corresponding move. 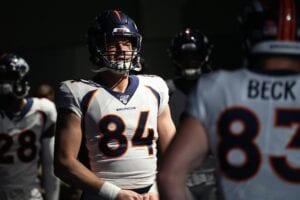 Fumagalli, 27, is a former fifth-round pick of the Broncos back in 2018. He was in the third year of his four-year, $2.7 million contract with Denver when he was placed on injured reserve.

The Broncos opted to waive Fumagalli from injured reserve with an injury settlement. He had a brief stint on the Texans’ practice squad before returning to Denver’s practice squad. The Broncos declined to tender him a qualifying offer, making him an unrestricted free agent.

He caught on with the Patriots before being waived by the team due to injury.

In 2020, Fumagalli appeared in eight games for the Broncos and caught eight passes for 80 yards receiving and one touchdown.