The 49ers are exercising Mike McGlinchey‘s fifth-year option, according to Dan Graziano. 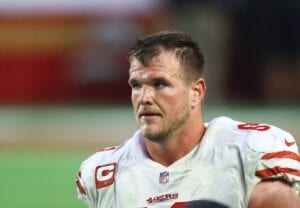 McGlinchey, 26, was the ninth overall pick in the 2018 NFL Draft. He signed a four-year, $18.341 million dollar rookie contract with the 49ers that included an $11.4 million dollar signing bonus.

In 2020, McGlinchey appeared in all 16 games for the 49rs and made 16 starts at right tackle. Pro Football Focus had him rated as the No. 19 offensive tackle out of 79 qualifying players.