“Everything that I’ve seen from Ryan shows us that he’s capable,” Taylor said, via Ben Baby of ESPN. “Again, you have to get into some games against some starting defenses to know what you have there, and that’s what we’ll find out.”

“I just believe in him, because he’s a very strong competitor,” said Boyd. “He had a real great preseason. All the guys seen it, and every guy in this locker room could admit to that. I feel like he could bring a different element to the table.”

The story around Ravens QB Lamar Jackson all offseason was whether he would be able to improve enough as a passer to prevent teams from selling out to stop him as a runner. So far Jackson’s shown progress in that area, though it will be tested Sunday against the Patriots.

“He’s throwing the ball better, that’s obvious,” an anonymous executive from a Ravens’ rival said via Sports Illustrated’s Albert Breer. “You see his ability to create as a thrower—he’s more accurate than he was, he’s more comfortable in the offense. Last year, they put him out there, and threw off the run-game stuff. They’re letting him throw the ball now. But it’s still enabled by his speed. He’s so f—ing fast.” 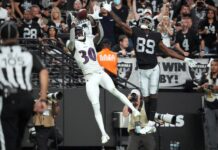