A major headline during the pre-draft process for Ravens QB Lamar Jackson was a quote by former Colts GM Bill Polian who suggested Jackson should consider switching to wide receiver given his athleticism and what Polian thought were questionable passing abilities. Now that Jackson is an MVP candidate, Polian is ready to admit his initial assessment missed the mark.

“I was wrong, because I used the old, traditional quarterback standard with him, which is clearly why John Harbaugh and Ozzie Newsome were more prescient than I was,” Polian said via USA Today’s Jarrett Bell. “And (Ravens OC Greg Roman) found a way in how he’s developed a system to use those dynamic skills. Bottom line, I was wrong.”

Steelers WR JuJu Smith-Schuster is on pace to see a major statistical regression this season. After catching 111 passes for 1,426 yards in 2018, Smith-Schuster’s current pace in 2019 has him looking at a final stat line of 66 catches for less than 1,000 yards. Steelers HC Mike Tomlin says the stats don’t tell the entire story, though.

“I have no issues with how he has handled himself in some of those matchups,” Tomlin said via Joe Rutter of the Pittsburgh Tribune-Review. “Statistics might not tell the story because of a lot of things going on around him. I like his work. I like his professionalism. I like how he wins his one-on-ones. Hopefully, it’s a catalyst for us getting more traction and consistently moving the ball offensively.” 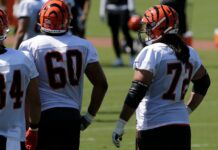