The Ravens were able to get rookie QB Lamar Jackson a few opportunities during Sunday’s win over the Bills.
Jackson says that the team plans to use him to keep opposing defenses off guessing.
“They never know what’s going to happen,” Jackson said, via ESPN.com. “Yeah, it keeps the defense guessing.”
Ravens HC John Harbaugh said that they’re hoping to see more production from Jackson’s reps moving forward.
“Well, we wanted to establish him as a threat quickly, not a possible threat. We wanted him to go out there and make plays, and generate plays for us,” Harbaugh said. “The whole idea is to generate offense. I guess a side benefit of it is that people have to prepare for certain things. Of course, that’s part of it. I’m not going to say that’s not part of it. But really, the idea is to move the football and create plays, and like we said from the beginning, use all weapons. That’s what we’re trying to do with all of our guys really, and Lamar is one of those guys.” 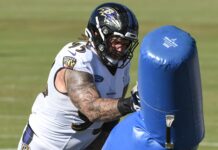