Running back didn’t seem to be high on the Browns list of offseason needs after the successful 2018 debut of Nick Chubb and the presence of veteran Duke Johnson. However, the Browns still went out and added RB Kareem Hunt after the Chiefs released him following multiple violent off-field incidents, including kicking a woman. That shouldn’t be read as an indictment of how Cleveland feels about Chubb, though.

For his part, Chubb says he’s bonded with Hunt and the two together “are gonna be scary.” Kitchens said the presence of Chubb actually made them feel more comfortable bringing on Hunt. 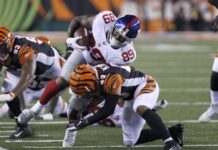