It appears as if the Bengals will opt to start their veterans in 2021 in order to protect QB Joe Burrow, which includes using Trey Hopkins, as well as Quinton Spain and Xavier Su’a-Filo at the guard spots.

“It seems like they’re letting the young guards develop instead of wedging them into the lineup as the opener closes in,” said Geoff Hobson of Bengals.com. “On the right, second-rounder Jackson Carman is getting good marks for progressing and third-year man Michael Jordan is looking to regain his starting spot at the opening of training camp.”

Browns’ DE Jadeveon Clowney is looking forward to matching up against guards across the NFL this season, as he believes that they are no match for him athletically.

“We love that matchup,” Clowney said, via BrownsWire.com. “We feel like they’re the unathletic guys. That guard position, they’re not real athletes down there. So they’re just physical and maulers. But we try to get in there and create those matchups for certain guys and hopefully we get some wins.”

Browns STs coordinator Mike Priefer said there was good competition between kickers Chase McLaughlin and Cody Parkey prior to his release. Priefer added that he was unaware of Parkey’s quad injury until the second quarter of Sunday’s preseason game. 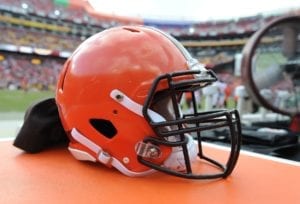 “Chase has done a great job this camp. It was a really good competition,” Priefer said, via George M. Thomas of the Akron Beacon Journal. “I was very sad to see Cody get hurt. He got hurt in pregame was when he did it. I did not find out until the second quarter because he tried to fight through it, and then he told me he was down and he was out. He did not want to make it worse, which I totally understood.”

Priefer mentioned that Parkey did well for them last season, but McLaughlin was able to win the position.

“Honestly, Cody did a really nice job for us last year. He came back eight pounds heavier. He came back stronger. He was going to be better on kickoffs. Chase was really giving him a run for his money,” Priefer said. “I like Chase. I am confident in Chase. I do not make those final decisions, but this is a big week for him. We kicked yesterday. He did a great job. We will kick tomorrow and then we will kick Sunday.”

Priefer added that McLaughlin’s kicking range was benefitting factor for him and thinks his 49-yard field goal against the Giants would’ve been good from 55-56 yards.

“Of course, yeah. Chase lined up and drilled a 49-yarder, and if he misses that, they go down and kick a field goal and they win that game,” Priefer said. “I know it is preseason, but still, that was a regular season kick for him. He drilled it. It probably would have been good from 55-56.” 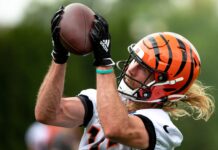 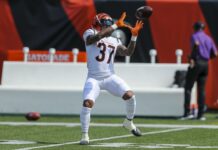