Bengals HC Zac Taylor believes their team showed resilience in their Week 5 overtime loss to the Packers but that there were “plenty of things” to correct.

“It was a resilient group that showed through the effort, especially in overtime,” Taylor said, via Geoff Hobson of the team’s official website. “They played to that final down. Things just didn’t go our way. That’s life in the NFL some times. There are plenty of things we have to correct. There are some different mistakes we have not made previously that we made and there are some things to clean up.”

Taylor added that he wants the Bengals to be a “relentless team” in all facets of the game.

“We’re a good team. We’re a resilient team,” Taylor said. “We’re a physical team and we’re going to be a relentless team. I feel like we’ve got that relentlessness on defense. We’ve got the performers on special teams and we’ve got the guys that can create enough on offense where we feel really good going into every game that we have an opportunity to win.”

Once again, Browns WR Odell Beckham is in the news for the wrong reasons that aren’t necessarily in his control. Beckham finished Week 5’s loss to the Chargers with only three targets, and for the second straight week he was held to just two catches. Browns QB Baker Mayfield defended the impact Beckham still has for the offense in the run game and as a decoy but it’s not exactly what they’re paying him $15.5 million for this year.

“For one, the run game, he was off the charts physicality wise,” Mayfield said via Cleveland.com’s Mary Kay Cabot. “We talk about our identity is run-first and we’re a physical team, and we’re trying to finish people in the run game and dominate that. You go back and watch him in the run game, and he’s physical. You do that, and then go look at Rashard Higgins’ touchdown and see how many guys are covering Odell compared to Higgy, and you will see exactly what kind of value he brings to us. We have to take advantage of his opportunities when they’re there because they are not going to come that often. That is the emphasis right now.”

While making an appearance at an event, Steelers WR JuJu Smith-Schuster said he had a difficult time processing his season-ending shoulder injury.

“I sat there and I cried,” Smith-Schuster said, via the team’s official site. “I cried all night. I cried because I love this game so much. More than anyone could know.”

Regarding his activity on social media, Smith-Schuster said football has always been his top priority and is grateful for his platform. 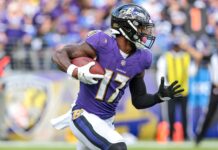