Browns’ RB Nick Chubb is taking the suggestion of HC Kevin Stefanski following their playoff loss in Kansas City on Sunday and will dwell on the game for the next couple of days. This includes a pair of dropped passes that Chubb is wishing he could have back.

“It was tough,’’ Chubb said Monday, via Mary Kay Cabot of Cleveland.com. “It didn’t go my way at all. I can only learn from it. It happened, and I’m just mad at myself because that’s something I worked so hard to improve on was catching the ball in the offseason, and up until yesterday, it’s been working for me. So I can only learn from it, get back to work and when the time comes again, be ready for it. Yeah, I am down, but it’s just those close games when you lose like that, that hurt way more than when you get blown out and just knowing that one drive could’ve made a difference in us going home or playing next week, and just for me personally, I hold myself to a high standard of playing at a high level every game, and I didn’t do that yesterday. Had a couple of errors, so I’m down about that, too.’’

Following up his MVP campaign from 2019 proved to be difficult for Ravens QB Lamar Jackson. He was still the same dynamic player in many ways, rushing for over 1,000 yards again, but defenses had many more answers for Jackson and the Ravens offense this season. Jackson struggled to quickly recognize zone coverages at times and the Ravens passing game, through design or talent, didn’t give him answers at other times. Those struggles have been magnified in the playoffs the past three years. But just as Jackson made a tremendous leap as a passer from his rookie to his second season, Ravens WR Willie Snead believes he can make a similar jump from this year.

“He is an elite runner, an elite passer, but there are steps he can take, better strides that he can take, and he knows that,” Snead said via the Athletic’s Jeff Zrebiec. “That’s the competitor in him to want to get better each and every offseason, to fix the little things that his game needs improvement on and continue to get better as a passer. I think if he knuckles down on that part of his game and really reaches his full potential in that area, then the sky is the limit for Lamar, man. It’s just a matter of time. So, it’s really on him. I think this game is going to be a wake-up call for him, hopefully this offseason.” 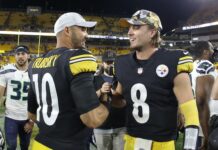 Browns DE Myles Garrett Out For Week 4 Against Falcons