Raiders HC Rich Bisaccia said the team did a great job preparing for the game throughout the week.

“I think a week of practice was good for everybody,” Bisaccia said, via Ed Graney of the Las Vegas Review-Journal. “It was emotional for all of us. But the guys were able to put it all in perspective when it came time to go to work. It’s still a job.

“We’ll see what kind of consistency we get from this going forward. That will be the challenge for all of us.” 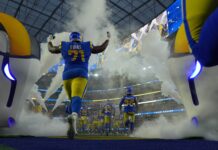