Dolphins HC Brian Flores doesn’t buy the idea that they should go with Ryan Fitzpatrick as their starting quarterback, even after he pulled out a win on Saturday.

“Tua has brought us a spark in a lot of other games. I think people will just forget that because we just remember the last thing,” Flores said, via ESPN.com. “Speculation on whatever people want to speculate about as far as what we should or shouldn’t do based on last night, I wouldn’t do that and forget the body of work over the course of the season to include the last however many games Tua has been starting [eight]. I think he’s played fairly well.

“People may disagree, but I think we would have to agree to disagree in that instance. That’s my take on that. It’s not based off one game or one quarter — there’s a lot of practices that people don’t see, walk-throughs that no one sees. But everyone wants to make a judgment and try to make a decision for us on what we should do without all that information.”

Flores explained that a lot goes into making this decision and Tua has shown improvement over the course of the season.

“Tua has played well. He’s made a lot of improvement over the course of the season. He’s developing,” Flores said. “I don’t make judgments and decisions based on one instance. There’s a lot that goes into the decisions we make — conversations and not just one game or one quarter. Tua has done a lot of good things for this team. He knows that. The team knows that.”

Patriots CB Joejuan Williams Out For Season With Shoulder Injury 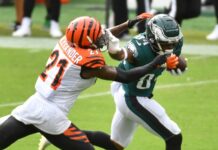