New Browns DC Joe Woods said that they will continue to use a 4-3 base defense for the upcoming season.

“I know the personnel here is tailored toward a 4-3 scheme, which I’m very comfortable with,” said Woods about retaining the scheme, per Nate Ulrich.  “We’ll stay with the 4-3 system here and focus on putting the guys in the right positions to make plays.” 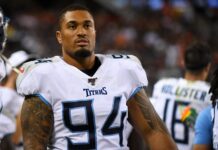