The knee problems that have plagued Colts K Adam Vinatieri all season and ultimately led Indianapolis to place him on injured reserve Monday date back to last season. Vinatieri said he’s had pain in his knee dating back to last year, but his desire to not miss any games led him to put off surgically fixing the issue until now.

“Hindsight, if I had a crystal ball I would have gotten it fixed last offseason because we dealt with it last year as well to a little bit lesser degree,” Vinatieri said via ESPN’s Mike Wells. “Unfortunately, in the middle of training camp it came back and that’s why we rested it in and took anti-inflams to try to get it under control. In hindsight, I didn’t want to miss any games at the beginning of the year. I probably should have missed a couple games at the start of the season. I was bullheaded. I said I can go, I can kick. It was kind of lousy the whole year.”

Vinatieri is a lock for the Hall of Fame when the time comes because of the sustained excellence of his career that’s now finished its 25th year. However, he missed an NFL-high 14 kicks this season, in part due to the knee injury. Vinatieri is set to be a free agent following the year. He says he wants to continue his career, but first, he has to rehab his knee back to 100 percent.

“I don’t like how this year ended for me and I wish I could have done more to help the team,” Vinatieri said. “I’m going to rehab and bust my butt to get healthy and strong and we’ll see where we’re at. If May, June comes around and I feel good, I’m kicking a good ball, then we’ll re-evaluate. If it’s not there, it’s not there. I understand everything ends at some point, but I’m not sure it’s there now or not.” 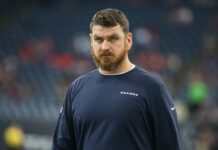 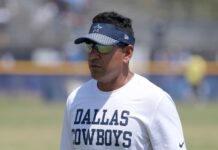