According to Ian Rapoport, Alabama OT Evan Neal tells him he is foregoing his remaining eligibility and declaring for the 2022 NFL Draft.

It’s been a hell of a ride Bama nation! Now it’s on to the next chapter.
Roll tide forever!! #bpsiphi4life pic.twitter.com/CfjjZBYvWl

Neal is widely viewed as the top tackle prospect in the coming draft class and has a strong chance to go in the top five picks come April.

Despite being 6-7 and 360 pounds, Neal has rare mobility for being that size.

The Athletic’s Dane Brugler has Neal rated as his No. 1 offensive tackle.

Neal was a second-team All-American as a junior and started 37 games over three seasons for Alabama, moving from left guard to right tackle to left tackle from year to year. 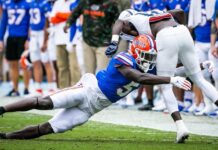