The fact that the Bear’s lost horribly to the New York Giants last night wasn’t the only bad thing that happened to the team. Their biggest problem is that they lost quarterback Jay Cutler to a concussion after being sacked nine times in the first quarter. Todd Collins relieved Cutler only to be knocked out of the game during the fourth quarter.

The NFL has implemented strict guidelines for any player that suffers a concussion to follow before they return to field. The leagues new guidelines state that any player that displays concussive symptoms must pace a number of tests and receive clearance from a team doctor as well as an independent neurologist before returning.

If Cutler shows serious symptoms throughout the week the Bears will be forced to go with either Todd Collins or Caleb Haine against the Carolina Panthers next Sunday. The Bears offense looked bad while Cutler was out there last night but they looked much worse without him.

Cutler’s status is something that we will be following  throughout the week. 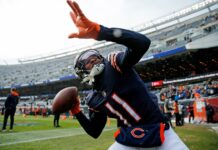