Ian Rapoport of NFL Media reports that the Bears have received calls and have held trade talks centered around second-year OT Teven Jenkins. 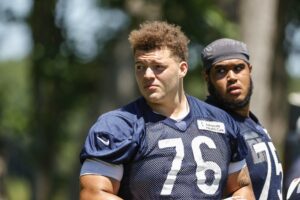 Brad Biggs mentions that based on how the Bears were using Jenkins this spring, it appears as though the new Bears’ regime would prefer to get a future draft pick for him than cut him outright.

Indications have been that Jenkins is not a great fit in the team’s new offense, so this figures to be a situation worth watching in the coming weeks.

Jenkins, 24, was a four-year starter at Oklahoma State and opted out of the 2020 season after seven games. He was an honorable mention All-Big Twelve in 2018 and 2019.

In 2021, Jenkins appeared in six games for the Bears making two starts for them.