According to Field Yates, the Bears have restructured TE Jimmy Graham‘s deal and created $4.66 million in additional cap space. 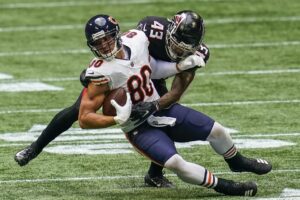 Chicago converted $5.825 million of Graham’s base salary into a signing bonus and added four void years onto the end of his deal, per Yates.

Graham, 34, is a former third-round pick of the Saints back in 2010. He spent five years in New Orleans before he was traded to the Seahawks in return for C Max Unger and a first-round pick.

Graham played out the final year of his four-year, $40 million contract before agreeing to a three-year, $30 million deal with the Packers in 2018.

In 2020, Graham appeared in all 16 games for the Bears and caught 50 passes for 456 yards receiving and eight touchdowns. Pro Football Focus had him rated as the No. 36 tight end out of 71 qualifying players.