Bears HC Matt Nagy announced that veteran QB Nick Foles will start Week 16’s game with Andy Dalton ruled out due to a groin injury, according to Ian Rapoport. 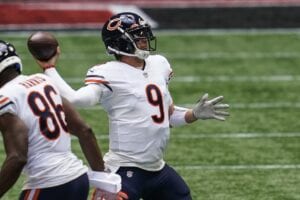 Nagy added that rookie QB Justin Fields (ankle) “may or may not” serve as Foles’ backup.

Foles, 32, is a former third-round pick of the Eagles back in 2012. Philadelphia traded Foles to the Rams back in 2015 in a deal for QB Sam Bradford and he later signed an extension with the team.

From there, Foles signed a four-year, $88 million contract with the Jaguars that included $50.125 million guaranteed. He was traded to the Bears in 2020.

In 2020, Foles appeared in nine games for the Bears and completed 64.7 percent of his pass attempts for 1,852 yards, 10 touchdowns and eight interceptions.