According to Brad Biggs, the Bears brought in four linebackers for workouts on Friday, including Jordan Evans. 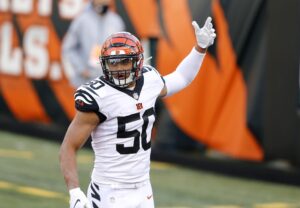 He finished out his rookie deal and was set to test free agency for the first time in his career before deciding to remain with the Bengals for another year. Evans suffered a torn ACL in October of last year and finished the season on injured reserve.

In 2021, Evans has appeared in five games for the Bengals, recording five tackles.