Ian Rapoport of NFL Media reports that the Bengals are picking up OT Jonah Williams‘ fifth-year option on Friday for the 2023 season. 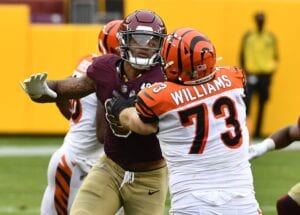 The fifth-year option is projected to cost the Bengals around $13,202,000 fully guaranteed for the 2023 season, but won’t prevent them from working on a long-term deal before then.