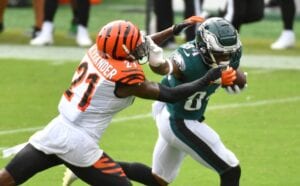 The Bengals announced Friday that two players had tested positive, but the team is on bye, so they have a chance of being back in Week 10.

Alexander was testing the open market as an unrestricted free agent this offseason when he agreed to a one-year, $4 million contract with the Bengals this past March.

In 2020, Alexander has appeared in six games for the Bengals and recorded 21 tackles, no interceptions and a pass defense.