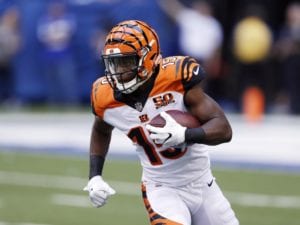 Earlier in the day, Mike Garafolo reported that Ross suffered a foot injury in practice right after the team discussed the possibility of him playing cornerback.

Ross has been a healthy scratch for a number of weeks this season and had asked for a trade. However, the Bengals opted to keep him for the rest of this season before he presumably heads into free agency.

Ross is in the final year of his rookie contract in 2020 after Cincinnati declined his fifth-year option.

In 2020, Ross has appeared in three games for the Bengals and caught two receptions for 17 yards.