Bengals QB Joe Burrow announced that he does not plan on playing in Week 18 and QB Brandon Allen will start, according to Charlie Goldsmith. 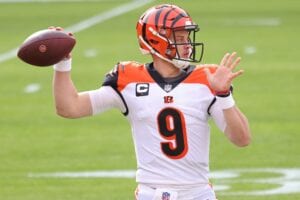 Burrow added that it is critical to rest his body ahead of the playoffs after clinching the AFC North.

“Any time you can get a little break at this point in the season … bodies are starting to wear down a little bit. Rest me this week so I can get back to full strength running around the way I need to be the first round of the playoffs,” said Burrow, via Paul Dehner Jr.

Burrow insists that his knee injury is not forcing him out of the regular-season finale and he could play if needed.

“[It is] sore but not bad, I could play if I needed to,” said Burrow, via Dehner Jr.