According to Tom Pelissero, the Bengals are re-signing veteran DL Mike Daniels to a one-year deal worth up to $2.5 million. 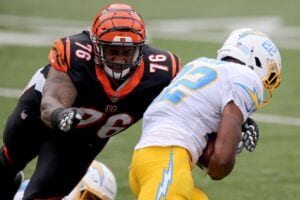 He signed a one-year, $2.7 million deal last offseason. He was testing the market as an unrestricted free agent.

In 2020, Daniels appeared in 11 games for the Bengals and recorded 17 tackles and no sacks.