According to Tom Pelissero, the Bengals are signing practice squad QB Brandon Allen to the active roster. 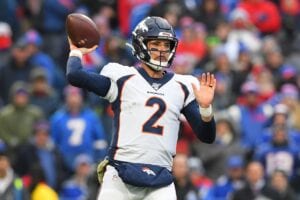 The Bengals will also promote G Quinton Spain from the practice squad to the active roster, per Ben Baby.

Allen, 28, is a former sixth-round pick out of Arkansas by the Jaguars back in 2016. He was entering the final year of a four-year, $2.4 million rookie contract when the Jaguars somewhat surprising waived him coming out of the preseason.

Denver declined to tender Allen as a restricted free agent this offseason and he signed a one-year deal with the Bengals in August. Cincinnati waived him coming out of camp but re-signed him to the practice squad.