The Buffalo Bills announced that they have placed four players on the COVID-19 list including CB Josh Norman after testing positive for COVID-19. Buffalo also placed TE Tyler Kroft, CB Levi Wallace, and S Dean Marlowe on the reserve list due to contract tracing protocols.

Norman, 32, is a former fifth-round pick of the Panthers back in 2012. He spent four years in Carolina and actually received the Panthers’ franchise tag following the 2015 season

However, Carolina surprisingly pulled the tender and he eventually signed a five-year, $75 million contract that included $36.5 million fully guaranteed with the Redskins.

Norman was set to make a base salary of $12 million for the 2020 season when the Bills released him back in February. He later signed a one-year deal with a base value of $6 million with Buffalo.

He was placed on injured reserve in September but was activated a month later. 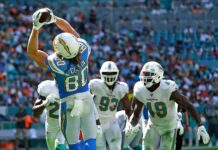