According to Sal Capaccio, the Bills are set to release WR Jake Kumerow and re-sign him as a procedural move for salary cap purposes. 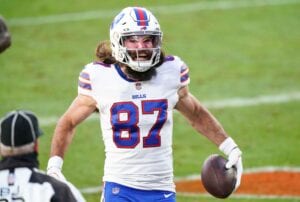 Kumerow was a key special teams player for the Bills in 2021.

Kumerow, 30, originally signed on with the Bengals as an undrafted free agent out of Wisconsin-Whitewater back in 2015. He was on and off the team’s practice squad during his rookie season but returned to the Bengals on a futures contract.

The Saints later claimed Kumerow off waivers before releasing him from their practice squad. He returned to the Bills on a futures contract last January.

In 2021, Kumerow appeared in 15 games for the Bills and recorded two receptions on six targets for 28 yards.