The Buffalo Bills are signing CB Cam Lewis to their active roster on Thursday, according to Adam Schefter. 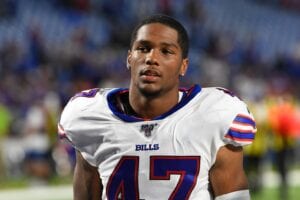 Lewis, 24, wound up going undrafted out of Buffalo back in 2019. He later signed a three-year, $1.755 million contract with the Bills, but was waived and eventually re-signed to their practice squad.

Buffalo brought Lewis back on a futures contract and he’s been on and off of their roster ever since.

In 2021, Lewis has appeared in one game and recorded five tackles, a forced fumble and a pass deflection.