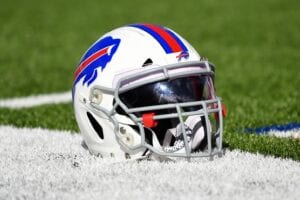 Adams announced his retirement from the NFL last month.

Adams, 24, signed with Buffalo as an undrafted free agent in 2020 and spent his rookie season on the practice squad.

At one point, he was a highly-regarded draft prospect but injuries seemed to affect him and he ended up not being selected in last year’s NFL Draft.

He a four-year starter at Washington and a second-team All-American and a first-team All-Pac 12 selection. However, he missed the 2017 season with a knee injury and then sat out 10 games with a back injury the next year.

In total, Adams appeared in 47 games, making 44 starts for Washington at left tackle. He signed with the Bills as an undrafted free agent in 2020, but was waived and re-signed to the practice squad. He signed a futures deal with the Bills for the 2021 season.

He did not appear in an NFL game.