According to John Keim, Jake Fisher will also work out for the Buffalo Bills on Friday.

Fisher, a former offensive tackle for the Bengals, had a workout with the Redskins as a tight end earlier this week.

The Texans also brought Fisher in for a workout before signing Darren Fells instead.

Fisher is reportedly down to 285 pounds and has been running routes with current NFL quarterbacks in California this offseason.

Fisher is testing the open market as an unrestricted free agent this offseason for the first time in his NFL career.

In 2018, Fisher appeared in 11 games for the Bengals before being placed on injured reserve. 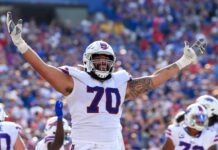