Adam Schefter reports that the Jets have fired GM Mike Maccagnan and VP of player personnel Brian Heimerdinger on Wednesday.

Jets HC Adam Gase will serve as the team’s interim GM while they search for a replacement.

The Jets have already confirmed the news:

Rumors had been circulating that there was a rift between Maccagnan and Gase. Although, Gase denied that there were any issues and said the reported rift “kind of pisses me off.”

It’s strange that the Jets allowed Maccagnan to spend over $125 million in free agency and run their 2019 draft if they weren’t set on allowing him to see it through.

Jason La Canfora reports that rumblings were rampant before the draft that the Jets were considering changing GMs with Eagles executive Joe Douglas being someone who is likely to be high on their list of possible replacements.

Maccagnan began his football career working for the Redskins as a scouting intern back in 1990. He held a number of positions before the Texans hired him as their coordinator of college scouting in 2000.

From there, Maccagnan worked his way up to director of college scouting before the Jets hired him as their GM for the 2015 season.

During his four years as Jets’ head coach, Maccagnan’s teams have produced a record of 24-40 (37.5 percent) and no playoff appearances. 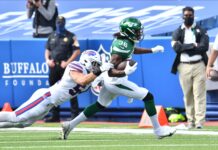 This is the EXACT REASON the NY Jets will NEVER win a second Super Bowl. This firing of Mike Maccagnan makes NO sense at all. When Maccagnan was hired as GM, the Jets already had Todd Bowles as their HC. Maccagnan NEVER had the opportunity to bring in his own HC from the very start of his tenure with the Jets. Then Jets’ Ownership allows Maccagnan to hire a new HC and DC in Gase and Williams followed by a GREAT free agency spending spree and finished the early 2019 offseason with a real good draft. Now! Jets’ Ownership decides… Read more »

Because they fired a GM who had not so stellar credentials? I don’t like the timing myself, but as Bill Parcells always said, you are what your record says you are! In this case, look at his draft record as Jets GM, look at the team record during his tenure. It tells you all you need to know.

Not so stellar credentials?! Maccagnan helped build the Texans for starters. With the Jets, Maccagnan’s big mistakes were bringing back Revis and ButtHead Cromartie. And as far as Maccagnan’s drafting goes Q. Williams, L. Williams. J Adams, M. Maye, D. Lee and S. Darnold are all his picks. It’s not Maccagna’s fault that the Jets’ Ownersip put the “cart before the horse”, by signing HC Bowles and then bringing in GM Maccagnan and basically telling both of them “make it work”. Bowles should have NEVER been hired as a HC especially in NY.