According to Adam Schefter, the Packers and CB Jaire Alexander have agreed on a new four-year, $84 million extension. 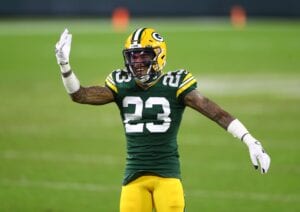 At $21 million a year, Alexander is the new highest-paid cornerback in the NFL. Schefter adds the deal includes a record $30 million signing bonus.

Even though Alexander missed most of the 2021 season due to injury, Green Bay still rated him highly as a young, key building-block player. This deal reflects that.

This deal will also likely lower his cap hit for 2022, as he had been scheduled to play on the fifth-year option.

Alexander, 25, is the former 18th overall selection in the 2018 NFL Draft by the Packers. He was entering the fourth year of a four-year, $12.050 million dollar rookie deal that included a $6.844 million dollar signing bonus before Green Bay picked up his option.

Alexander was set to make a fully guaranteed base salary of $13.294 million in 2022 under the fifth-year option.

In 2021, Alexander appeared in four games for the Packers, recording 13 tackles, three pass deflections, and one interception.