The Houston Texans issued the following statement regarding the decision to fire HC Bill O’Brien:

A statement from Cal McNair. pic.twitter.com/5JbZylPTbp 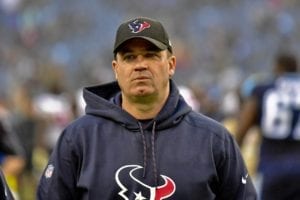 Adam Schefter reports that Romeo Crennel is likely to be the team’s interim head coach.

“Bill was very professional. He thanked us for the opportunity and was sorry he couldn’t get us over the hump,” Texans owner Cal McNair said of the decision, per Mark Berman.

The Texans have gotten off to an 0-4 start to the season after O’Brien had traded away Hopkins and future assets to push for a deep playoff run.

Reports from over the weekend said that O’Brien was going to be more involved in play-calling and game-planning, but it appears as though ownership decided he had Sunday’s game to turn things around before opting to make major changes.