49ers HC Kyle Shanahan confirmed that Trey Lance will have season-ending surgery on for a broken ankle on Monday.

Adam Schefter reports that 49ers’ QB Trey Lance suffered a “significant” ankle injury on Sunday that is expected to require surgery and will likely end his 2022 season. 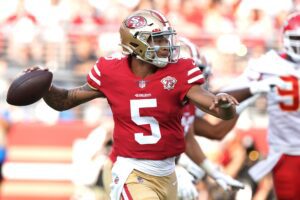 Lance was carted off the field ankle being tackled while scrambling. The medical staff appeared to place an aircast on his leg, so indications were that this was a really serious injury for the second-year quarterback.

The 49ers opted to hold on to Jimmy Garoppolo and redo his contract, which now looks like an even better move with the Lance injury.

You can expect the 49ers to place Lance on injured reserve in the coming days.

Lance, 22, was a one-year starter at North Dakota State. He was a unanimous All-American sophomore but was limited to appearing in just one game last year due to NDSU’s schedule.

San Francisco will have a fifth-year option to pick up on him in 2024.

In 2021, Lance appeared in six games for the 49ers and completed 57.7 percent of his passes for 603 yards, five touchdowns, and two interceptions. He also rushed for 168 yards and a touchdown.

We will have more news on Lance as it becomes available.