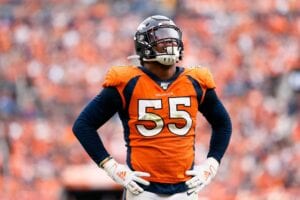 Here’s the full list of roster moves from the Broncos on Friday:

In 2021, Chubb has appeared in six games for the Broncos and recorded 16 tackles, no sacks, an interception and two pass deflections.

In 2021, Jeudy has appeared in nine games for the Broncos and caught 36 passes for 437 yards receiving and no touchdowns.