According to Mike Klis, the Broncos will place OT Calvin Anderson on injured reserve Thursday. 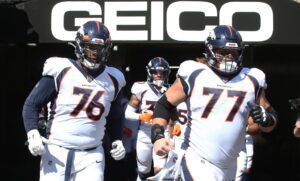 Anderson has both knee and ankle injuries but Klis says he doesn’t need surgery and should be back in three to five weeks.

He’ll be eligible to return from IR after a minimum of three games missed.

Anderson, 25, signed with the Patriots as an undrafted free agent out of Texas in 2019. However, New England waived him after just a couple of weeks and he was claimed by the Jets.

The Jets waived Anderson coming out of the preseason and he signed to the practice squad. However, the Broncos signed him away to their roster after a month.

Denver re-signed Anderson as an exclusive rights free agent in 2021.

In 2021, Anderson has appeared in 11 games for the Broncos and made three starts at left tackle.