According to Tyler Dragon, the Browns are another team interested in DT Ndamukong Suh. 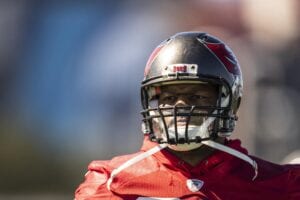 However, Mary Kay Cabot reports the Browns have not been interested in Suh this offseason and nothing has changed from her understanding of things.

Dragon previously reported the Vikings and Raiders had shown interest in Suh and says they remain in the mix.

However, Josina Anderson said at the time, per a league source, the Raiders were not currently “in pursuit” of Suh.

Dragon adds Suh is expected to sign with a team closer to the start of training camp.

Suh, 35, is a former first-round pick of the Lions back in 2010. He spent five years in Detroit before signing a six-year, $114 million contract that included $60 million guaranteed with the Dolphins a few years ago.

Suh most recently signed a one-year, $9 million deal with the Buccaneers back in March of 2021.

In 2021, Suh appeared in all 17 games for the Buccaneers and recorded 27 tackles, six sacks, and one fumble recovery.