Ian Rapoport reports that an MRI on Browns rookie S Grant Delpit revealed that he did, in fact, suffer a torn Achilles.

You can expect the Browns to place Delpit on injured reserve in the coming days and add someone to their roster.

Browns second-round S Grant Delpit was carted off during Monday’s practice after going down with an injury during position drills. 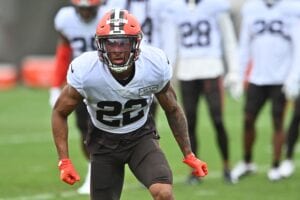 Adam Schefter reports that the Browns are concerned that Delpit suffered an Achilles injury. Delpit is currently undergoing testing to determine the severity of the issue.

Delpit, 21, was a three-year starter at LSU and earned two consecutive All-American and first-team All-SEC honors. The Browns selected him with the No. 44 pick in this year’s draft.

We’ll have more regarding Delpit as the news is available.

186,505FansLike
7,623FollowersFollow
275,872FollowersFollow
© NFLTradeRumors.co is an independent news source and has no affiliation with the National Football League (NFL), NFL.com, or any team(s).
wpDiscuz