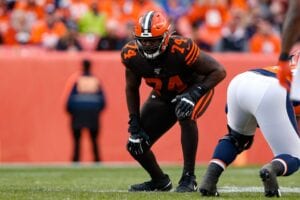 Rapoport says Hubbard attempted to play through the injury, but it never quite healed and it has been determined that this is the best course of action for him.

You can expect the Browns to place him on injured reserve in the coming days and add someone to their roster.

Hubbard signed a five-year, $36.5 million contract with the Browns in March of 2018. He’s entering the fourth year of this contract.