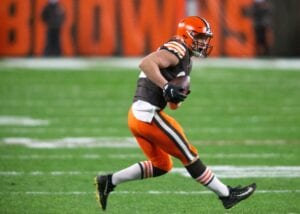 Bryant, 22, was selected with the No. 115 overall pick in the fourth round by the Browns. He’s currently in the first year of his four-year, $4.1 million contract with Cleveland.

In 2020, Bryant has appeared in 15 games for the Browns and caught 24 passes for 238 yards receiving and three touchdowns.