According to Tony Grossi, the Browns are placing K Chase McLaughlin on the COVID-19 list and promoting K Chris Naggar from the practice squad in a corresponding move. 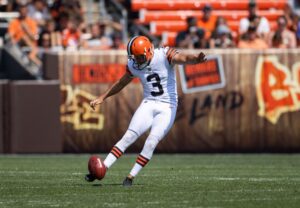 McLaughlin, 25, originally signed on with the Bills as an undrafted free agent out of Illinois in 2019. He was among Buffalo’s final roster cuts coming out of the preseason and caught on with the Vikings’ practice squad.

From there, McLaughlin had stints with the Chargers, 49ers, Colts, Vikings and Jaguars before he was claimed off of waivers by the Jets last year. New York waived him in December of last year and was quickly claimed by the Browns.