Josina Anderson is reporting that Browns RB Kareem Hunt is looking for a contract extension from Cleveland and has sat out two straight practices. 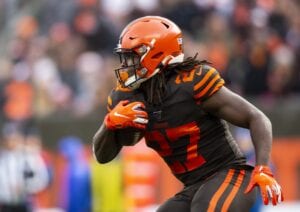 Anderson explains that HUnt has told the Browns multiple times that his plan is to participate in individual drills only. The belief, according to Anderson’s sources, is that Hunt’s partial “hold in” isn’t related to health.

Hunt’s agent was reportedly at the Browns facility earlier in the week and Anderson has been told that he has periodically told members of the team informally that he “wants to get paid or traded.”

A source tells Anderson that they believe Hunt would like to stay in Cleveland, but just wants to be compensated for his worth.

Hunt admitted a few months ago that he’s asked the Browns for a contract extension that would allow him to finish his career in Cleveland.

Hunt mentioned that his agent has spoken to the team “a little bit” about an extension and is “going to see what they want to do with me.”

“I really don’t know what to think right now,’’ Hunt said, via Mary Kay Cabot of Cleveland.com. “I’m just trying to go out there and show them I’m healthy, show them I’m ready to ball out for them as long as they want me to, so I’d love to here for a long time. . . . I was born and raised here. I’d love to finish my career here and just keep playing the game with [Nick] Chubb longer and with the great guys on this great team.”

Hunt, 26, is a former third-round pick of the Chiefs back in 2017. He was in the second year of his four-year, $3.263-million contract and set to make base salaries of $555,000 and $645,000 over the next two years of the agreement when the Chiefs waived him in December following video of him kicking a woman.

Hunt will be an unrestricted free agent in 2023.

In 2021, Hunt appeared in eight games for the Browns and rushed for 386 yards on 78 carries (4.9 YPC) to go along with 22 receptions for 174 yards receiving and five total touchdowns.