The Cleveland Browns officially ruled out RB Nick Chubb from Week 6 due to a calf injury, according to Jake Trotter. 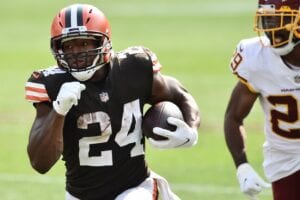 Chubb was trending to miss Sunday’s game after not participating in practice this week.

In 2021, Chubb has appeared in five games and recorded 90 rushing attempts for 523 yards (5.8 YPC), one lost fumble, and two touchdowns. He’s also added five receptions for 35 yards (7.0 YPC) and no touchdowns.