Ian Rapoport reports that the Browns and TE David Njoku have agreed to a four-year, $56.75 million extension. 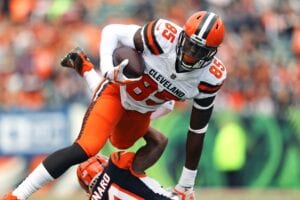 Rapoport adds that Njoku is receiving $28 million guaranteed at signing.

Earlier this week, it was reported that the Browns and Njoku were “very close” on an extension and negotiating on guaranteed money figures, so they clearly have come to an agreement.

The Browns placed the franchise tag on him earlier this offseason which is worth $10.9 million fully guaranteed. Njoku has not attended OTAs as negotiations took place.

The Browns picked up Njoku’s fifth-year option in April of last year for roughly $6 million for the 2021 season. He was set to be an unrestricted free agent in 2022 when the Browns franchise-tagged him.