Former Raiders and Falcons WR Bryan Edwards officially passed through waivers unclaimed on Friday and is now free to sign with a team of his choosing. 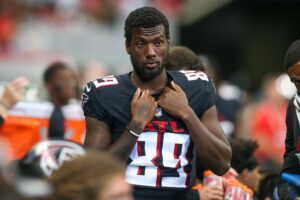 Back in May, the Raiders traded Edwards and a 2023 seventh-round pick to the Falcons in exchange for a 2023 fifth-round pick.

In 2022, Edwards has appeared in seven games and recorded three receptions for 15 yards.